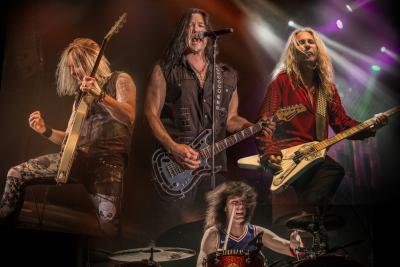 1990 Slaughter hit radio, MTV and the U.S. touring circuit like a tornado - coming seemingly out of nowhere to roll through everything in its path and turn it upside down. Touring the world with bands that they loved, Kiss, Ozzy, and others meant the good times were just a song away , and their first hit single, "Up All Night" certainly fit into that mold, their second chart-topper, "Fly To The Angels" was more representative of the spirituality and awareness that goes into most of the band's music and lyrics. But never were Slaughter more accurately represented that live onstage in front of their legions of devoted fans over the last ten years.