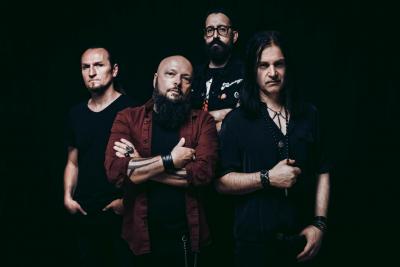 The first important step has been mastered effortlessly; now LAST TEMPTATION are going the whole hog. Following their successful album debut and enthusiastic reviews in countless music rags, shows with bands such as Dream Theater, plus festivals such as Hellfest, the band surrounding guitarist Peter Scheithauer (Killing Machine, Belladonna, Temple of Brutality) and vocalist Butcho Vukovic (Watcha) is all set to embark on the second stage of its career in summer 2021. LAST TEMPTATION have signed a new recording deal with Golden Robot Records and are ready to present four new singles between June 2021 and January 2022, followed by their brand-new album ‘Ashes’N’Fire’ in February 2022. The first single ‘I Don`t Wanna Be Your God’ (supported by a video clip) will be out today, followed by title track ‘Ashes’N’Fire’ in September, with the third single ‘Stronger Than Fate’ scheduled for a November release, and the fourth lead single ‘Main Attraction’ expected to be out in mid-January, shortly before the arrival of the new album. “You can feel that we’ve made a major step forward, both as a live band and as songwriters, thanks to the shows we’ve played so far and we are very excited to be working with WE-Live Agency.” Scheithauer rejoices over his band’s remarkable development.