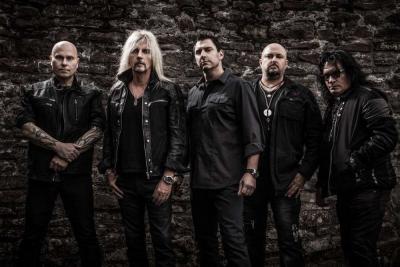 “I’d rather have long-term success than the hit album everybody is always referring to.” Axel Rudi Pell knows exactly what he is talking about. His solo career has lasted for almost three decades now. In the international hard rocking universe, Pell is nothing short of a phenomenon: a musician who flies under the radar, but certainly isn’t invisible. He’s an honest worker who has learned his skills from scratch. He’s never experienced writer’s block, has never followed trends or fashions. You know what to expect from him.

So, what’s new? “Game Of Sin” from 2016 was a huge success and peaked at no. 11 in the German charts. Its successor is called “Knights Call” and studio album no. 17 (in words: seventeen). That’s a fact and more than a symbol of steadily releasing albums on SPV, Pell’s tried and trusted label since 1989. More than 1.5 million people worldwide have bought Pell’s albums. What an impressive number! But there is no reason for the axeman to rest on his laurels. “Why should I retire?” asks the 57-year-old. And answers his own question: “As long as I can do what I like I’m the happiest man in the world.”

Basically Pell is living his very own dream: He has turned his hobby into a profession. But there’s also a lot of determination involved. His ongoing passion drives him all the time, he’s always on the lookout for a better chorus, a better solo, a better bridge, a better song. “Writing songs is like a lot of things in life: It’s my way or the highway!” His confidence in his abilities is enormous, but he also knows that he can rely on his GermanAmerican dream team featuring singer Johnny Gioeli and drummer Bobby Rondinelli. And of course, his fans are very important to him. “For me, direct feedback is essential. Playing only in the studio would be boring. Who would sign up for that?” Writing some of his new material, the live atmosphere was right there at the back of his mind. “I knew from the very beginning that the opening track 'The Wild And The Young' would be the opener for the album.” It also sets the pace for the whole ride: ARP 2018 is about more grooves, more melodies and more diversity. The mix between medieval mysticism and fantasy folklore is still there, but there’s been a bit of fine tuning. Pell‘s riffing is two-dimensional, 'Follow The Sun' for example brings to mind the development the great Tony Iommi made in the 80s when he successfully freed himself from the old Black Sabbath corset. “I was surprised how easily that came about. There was no intention at all, it just happened.” A shuffle like on 'Wildest Dreams' with its stadium-like choir at the end has never been heard before, and his fans have waited for a hard-rocking anthem such as 'Long Live Rock' since 'Rock The Nation' off Pell’s “Mystica“ (2006) album. In the middle of the recording, there’s the beautiful instrumental 'Truth And Lies' which bears witness once again to the guitarist’s love for his instrument. There are a number of typical ARP anthems as well, which are as long as their predecessors; 'The Crusaders Of Doom' and the mighty Led-Zeppelin-meets-Rainbow classic 'Tower Of Babylon' showcase another passion of Pell’s. “I like to delve deeply into a song. It’s not about extra time for my solos, it’s about the atmosphere it creates for the listener.” And let’s not forget Pell’s infamous ballads. This time the magnum opus is called 'Beyond The Light', Pell having recruited the one and only Pamela Falcon, an American singer who has lived in his hometown of Bochum for more than thirty years. She has contributed another goosebump moment on “Knights Call”. But there’s no indication of Pell slowing down because he, a true child of the 60s, is still raving about how society is changing its ways, like on 'Slaves On The Run'. “We are all slaves in one way or another! Rock’s supposed to stand for self-determination and freedom, but that seems to be history now. Everybody is looking for the fast buck and for attention, everybody is online all the time, for just a couple of sad clicks and likes. We are on the road without arriving wherever that might be. Is this what life is all about, being stuck to a computer?” Pell is right in every sense of the word. Well, his experience tells it all, thirty years and counting. There is more to come, that much is for sure. For now, enjoy the ride with “Knights Call”!